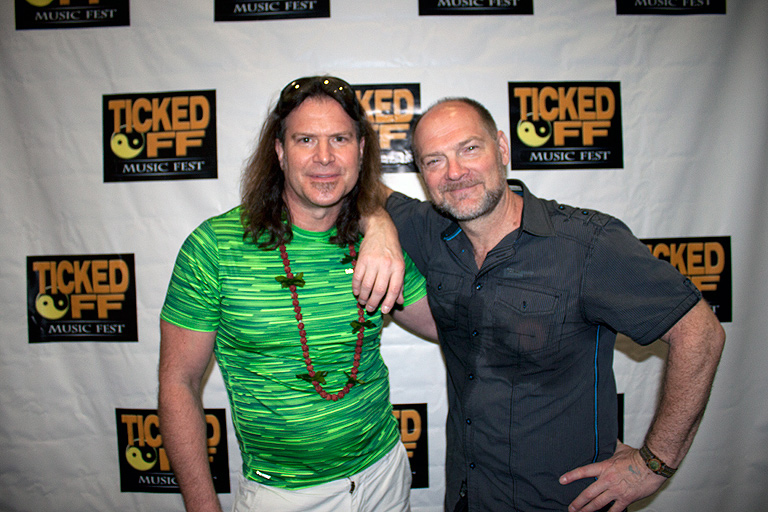 By GREGG KIRK
On Saturday, January 23, 2016 the Ticked Off Music Fest held its fifth event since 2013 and its first event off of the contiguous US mainland. It was hosted in a location that most people would think to be the last place where Lyme disease could appear… the island of Oahu, Hawaii.

Even in the Lyme community, Hawaii is thought to be a bit of a “safe zone” where no ticks exist and incidents of infection and Lyme patients is nil. I admit to being of this mind when I got a call in the fall of last year from two Lyme patients living on two separate islands in Hawaii, inviting us to host an event there.

The first thing I asked these women was the first thing people asked me when I announced we were doing our next event in Honolulu… “Is there Lyme disease in Hawaii?” The fact that these Lyme patients were infected on the mainland and then moved to Hawaii wasn’t a stretch of the imagination, and the fact that a high percentage of the islands is populated with military personnel who are getting infected all over the world and then being relocated to Hawaii was an easy thing to understand. But what about ticks?

Melissa Cox, a musician who played our very first event in Wilmington, DE and who is a former journalist and nonprofit VP, came onboard to assist, and she and I did some deep research on the current situation with ticks on Hawaii. We scoured multiple resources, including LymeDisease.org’s great digital library and also consulted with Dr. Kerry Clark from Florida who has done immense amounts of research on ticks and their effects on animals and humans in another state where Lyme disease is not thought to exist.

We found that there is an abundance of the Brown Dog Tick on all the Hawaiian Islands, and Dr. Clark has proven that this breed of tick does carry Borrellia Burdorferi, the bacteria known as Lyme disease (read the research article).

We also began to see more and more stories posted by Hawaiian Lyme patients on social media, many of them lamenting that they didn’t know of any doctors on the islands who specifically treated Lyme. We did eventually find a few Lyme-literate doctors in Hawaii, the foremost being Dr. Kristen Coles who practices at the Steelsmith Natural Health Center in Honolulu. And during our search we also discovered Jennifer Goodwin, a California Lyme patient who spends a great deal of time on the islands and who has an inspiring perspective on her healing journey.

We also wrote an article about Heather Cameron, a woman who has known Lyme most of her life and who grew up on the islands where she had been misdiagnosed by local doctors for years… a situation that unfortunately happens to most Lyme patients all over the world.

We did our homework. So when I received a “gotcha” phone call from a TV station in Honolulu a week before I was scheduled to fly out for the event, I was prepared.

The reporter politely asked me why I was holding an event in Hawaii when there is no evidence of Lyme disease. I politely told her that it is underreported but there are plenty of Lyme patients and plenty of Brown Dog ticks to be concerned. She then flatly asked me if I was holding this event as a boondoggle and was raising money and then taking it off the island. I explained to her that we had been invited by Hawaiians and the money we raised was going to a patient fund to help sick Lyme patients in crisis… many whom live on Hawaii. She went silent. I suggested to her that if she was looking for a story, she would look like a hero if she reported the struggles Hawaiian Lyme patients are faced with and the potential threat of the Brown Dog Tick. I then followed up with her several times to see if she would actually report on these topics, but she and her producer ultimately declined.

Due to the great PR work Melissa Cox did, I was interviewed by a few local newspapers, radio stations and even made a TV morning show appearance with our favorite collaborator, Les Stroud from the “Survivorman” TV series.

Les has been bitten by more ticks than anyone I know and has never contracted any disease, thank god, but his message to our audience is you don’t have to be afraid to go back in the woods if you’ve been bitten by a tick. Practice good survival skills, be vigilant of ticks and know how to extract them properly (watch this video to learn how). Continue to enjoy nature.

One of the first things the morning show host asked us before shooting and then eventually on the air was, “Is there Lyme disease in Hawaii?” and of course I had plenty of things to say about it.

When the show was over, I was notified by the TV station that the Hawaii Department of Health had called the show to ask me to correct what I was saying about Lyme disease being in Hawaii. I told the people at the station that the entire reason for me coming to Hawaii was to make just the opposite point and that I could not possibly say Lyme didn’t exist there. They said I could expect a call from the DOH and I told them I was happy to take it.

The next day at our event, I told the audience a story about when I was a newspaper editor in my 20s, living at the Delaware beaches. I worked for a small weekly newspaper several miles inland, and one day one of the employees told me her boyfriend kept finding Black Widow spiders while on the job as a cable installer. Black Widows are not known to live outside warm climates, but this woman told me her boyfriend was finding them in cable boxes, even during the winter months. Apparently, these boxes had electrical current running through them that gave off a bit of heat that attracted the spiders. The question was, how were they getting to Delaware?

I ended up solving the mystery and breaking the story by finding out that cucumbers were being driven up on trucks from southern states and then delivered to a pickle plant in southern Delaware. The spiders were riding along with the cucumbers and being inadvertently relocated. After I ran the article, several people came to my office and presented me with jars containing all varieties of Black Widows, many of which I didn’t know existed. None of my coworkers appreciated this, and they started calling me Spider Man.

As you can imagine, when the article was published it created a bit of a stir, and I got a call from a woman representing the local hospital. She accused me of trying to create a sensation and a panic. I invited her to come to my office to gaze upon the 12 jars of Black Widow spiders I had to show her. She cordially declined and then offered to run a seminar at the hospital on what someone should do if bitten by a spider. That day the Truth prevailed.

I remarked that the Lyme patients in the audience were living proof of the Lyme situation in Hawaii… just like the jars of spiders in my office. Not a smooth analogy but it made the point.

When I told the audience what the DOH had said, a few yelled obscenities and booed. They were all Hawaiian Lyme patients, many who gave us hugs and literally cried in our arms afterward out of sheer frustration with the situation in their home state. One of them was a woman from Maui who claims to have been infected there.

We would like to thank the people of Hawaii for opening their arms to us and being the living embodiment of “Aloha” — Zina Ruben, Heather Cameron and Rev. Suzanne Cameron in particular — and we support you on what you’re going through at home. To everyone else in the Lyme community and beyond, we post this article to increase awareness and knowledge… not to create panic, but to shed light on the situation. Lyme disease has been reported in every state in the US and it is time that doctors and the general public realize that it is a reality outside of New England in the US.